Many quilt patterns draw their inspiration from spiritual sources. Found back as far as 1840, the Delectable Mountains pattern has a long tradition of being connected to John Bunyan’s allegory Pilgrim’s Progress. This was such an important book in the homes of American families, that it was usually the only book, besides the Bible, that families owned.

In the story, the Delectable Mountains were filled with beautiful gardens, orchards, vineyards and fountains of water. From the mountains’ heights, the pilgrims could see the gates of the Celestial City (heaven). This was such a vivid passage in the story that it was only natural that quilters created a block to honor it.

The pattern is often made with bias set squares turned to form a triangular design that is suggestive of mountains. Today’s quilters have found easier methods to create this block, using strip sets.
​
The Delectable Mountains block is considered one of the most identifiable American quilt patterns. In fact, it is one of the few quilt blocks that has had a universal name until the end of the 19th century. The Ladies Art Company included it in their pattern catalog as pattern #210 in 1898. Variations of it have been called World’s Fair and Solomon’s Temple. 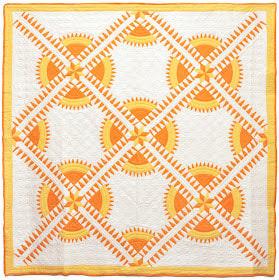 First documented in 1850, the New York Beauty quilt pattern is not for the faint of heart (or beginner quilter). It is a striking (and challenging) pattern, with curved seams and sharp points. The New York Beauty quilt was known by several names in the nineteenth century: "Rocky Mountain Road", "Rocky Mountain", ”Rail Through The Mountains”, "Crown of Thorns", and "The Great Divide". In the 1930s, the “New York Beauty” title was adopted by Stearns and Foster Mountain Mist® company for an old quilt pattern to be published as a new design. It hadn’t been popular in New York in the previous century, but it was in Tennessee.

The Mountain Mist New York Beauty
In 1930, Mountain Mist, a division of the Stearns and Foster company, published a variety of quilt patterns to boost the sale of quilt batting. In the spirit of the Colonial Revival, designs were based on traditional patterns but were given new names. New York Beauty was one of these patterns. The Mountain Mist New York Beauty is a very specific quilt. Its design features a diagonal set rather than a vertical and horizontal block, and the cornerstones are LeMoyne stars constructed from eight alternating diamonds in two colors. Elements of the traditional pattern are maintained, but dramatically streamlined and modernized. The colors of the Mountain Mist New York Beauty are orange and yellow on white, and sometimes red and blue on white. According to the color chart, the orange and yellow on white would be "pleasing" and "complimentary to the modern bedroom" while the red and blue on white would produce "an exact replica" of the traditional quilt.

Compared with earlier Rocky Mountain Road or Crown of Thorns quilts, points are shorter, wider, fewer, and cut off at the tips. The Mountain Mist quilt has a simple, long strip border, often seen as a double strip border with yellow and orange fabric. The suggested quilting design is overlapping or intersecting circles.

The design is described by Mountain Mist as "a very old pieced pattern dating from 1776" - a highly romanticized notion of quiltmaking in America - but the pattern name stuck. Since the 1930's, the name "New York Beauty" has been associated with all quilts made with the same basic design of spiked quarter circles wedged in the corners of square or rectangular blocks, and retroactively applied to pre-1930 quilts. In that regard, the Mountain Mist New York Beauty changed history.

August 2021
​Gilbert de Mortier, Marquis de Lafayette (1757-1834), a close friend of General George Washington, played a key role in both the American and French Revolutions. He was known as “the hero of two worlds”, and as an officer in the French army, joined the American colonists in their fight against the British. He was instrumental in achieving the surrender of the British forces in Yorktown.

Legend has it, that as a thank you, he was invited to a banquet to celebrate the colonists’ victory in the American War of Independence. At the end of the meal, guests were offered fruit, as was customary. Lafayette chose an orange, which he charmingly cut into four segments before he peeled it. One of the female guests later picked up the discarded segments and, in honor of the French hero, used them as the basis for her next quilt pattern.

The Orange Peel quilt block is also known as Rob Peter To Pay Paul and Pin Cushion.
The block was first published as Orange Peel in 1897 as the Ladies Art Company’s block #107, then resurrected twice with near-identical names in the Kansas City Star. (1929, 1956), and in 1933, the Chicago Tribune called it Melon Patch. That same year, Holland’s Magazine of Dallas, Texas called it Save A Piece (Scraps).

No matter the name, it is a graphically appealing block, and can be constructed in a variety of ways, making it a favorite for both traditional and modern quilters.
​